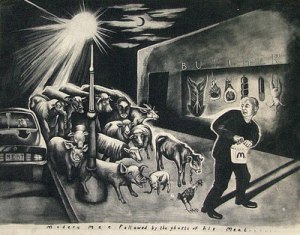 Who will speak out for us?
The animals you call food.
Who will give voice to our suffering?
Who will tell of the torture?
Who will cry out against the cruelty?
Our misery speaks volumes.
Who will listen to our story?
Who will care?

LAYING HEN. Listen to me. I lived a short brutal life! If you can call it that. Every nightmare second spent on a factory farm. Billions of us every year. Over a million every hour. Slaughtered! I was a laying hen. Male chicks are useless to the egg industry. They are gassed. Crushed. Suffocated in trash bags. Piled on top of one another and left to die. They have it easy! Soon after I hatched, part of my beak was seared off with a hot blade. It’s done to all factory farmed chickens, turkeys and ducks. Without painkillers. It hurts. How it hurts! For weeks afterwards. 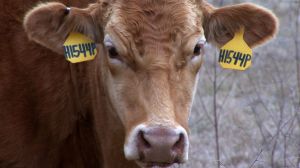 BEEF COW. You want to talk about mutilation? They castrated me. They cut off my horns. They burned me with a branding iron. You think I was given any painkillers?

LAYING HEN. I was packed into a small cage with a half-dozen other hens. We had no room to move.It was horrible. My natural instincts told me to perch, nest, dust-bathe, forage and roam. But I couldn’t even move my wings. It was so crowded there. I was desperate. Frustrated. I wanted out. That’s why they cut off our beaks, so we wouldn’t peck each other in our misery!

I was kept laying . . . eggs, eggs and more eggs. I gave so much that my bones became fragile from the loss of calcium. When my production declined, a worker pulled me from the wire battery cage, but my wing got caught and was ripped off. I screamed in pain, but only briefly. I was killed and my battered flesh was sent to the rendering plant.

BROILER. I wasn’t put in a cage but in a large shed, like a warehouse, with tens of thousands of other birds. The stench, the dust and the ammonia fumes – they were awful, we had no relief. And our bodies! They were made to grow so fast and so big. My legs couldn’t even support my weight.

My life was sheer hell. I wish I could tell you that my death was quick and painless. When it came time for slaughter, I was snatched up with other birds and crammed into a crate which was stacked on top of other crates in a truck. No food or water during the trip. I was hungry and thirsty and terrified.

Where were we going? What was going to happen? When we finally got to the slaughter house, I was torn from the crate and shackled upside down onto a metal rack. I was conscious when they slit my throat and still alive when they immersed me into a tank of scalding water. 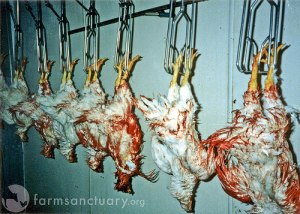 PIG. Listen to me. If I had been a pig in the wild I would have liked nothing better than to stick my snout in the dirt and root. I would have taken mud baths to cool myself. And oh, how I would have roamed, for miles. Sniffing, sniffing and sniffing for food. Exploring everywhere.

But I spent my life confined on a factory farm. I wasn’t even viewed as an animal by the people there. No, I was a meat- producing, piglet-making machine without any feelings.

I was weaned from my mother at two weeks old and became a breeder like her. This meant that I was put in a gestation cage, a metal stall so small that it was impossible for me to move around. I just wanted out. I wanted to be free. The boredom was terrible. I’d bang my head on the cage door, but that did no good. I’d finally just give up.

After giving birth, it was even worse. I was placed in an even smaller farrowing crate while my piglets nursed. Over and over again, either pregnant or nursing, I was always caged.

Other pigs are put into concrete cells called fattening pens, each holding about a dozen pigs. Of course, the pigs act out in their boredom and frustration and try to bite one another. The factory farmers answer to this is to cut off their tales, cut off the ends of some of their teeth and punch bits out of their ears. 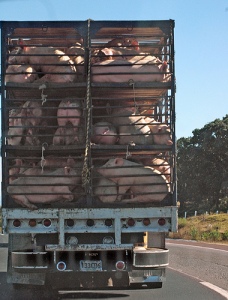 Of course, we all had to die at some point. When I had stopped giving them enough piglets, my time had come for slaughter. A quick and painless death would have been a blessing to me. But that was not to be. I was packed into a hot truck with so many other pigs, crammed together, shocked with an electric prod. We were frightened, angry, biting at each other, trying to get out, looking for escape where there was none. And then the long ride, the heat unbearable, standing in our own shit. Many of us died, right there in the truck. What a hellish ride!

How can I explain to you what I saw and heard and smelled at the slaughter house? Do you have any idea of the horrors there? I watched my brothers and sisters and my children being killed. I saw them struggle and heard their cries for help and I saw the workers brutalize them in their impatience. I saw their blood splashed all over the place!

When it was my turn, a worker put a captive bolt pistol to my head to stun me. But I struggled and the bolt missed its mark. I was still conscious when my throat was slit. My last sensations were feeling the blade of that knife and hearing the coarse laugh of the man who used it on me. 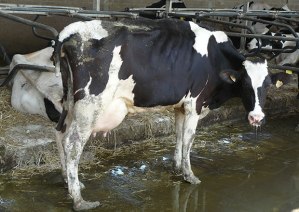 Over and over again I was kept pregnant, artificially inseminated, to produce milk. Like all mammals, I produced milk for my babies. Or didn’t you know this? I was pumped full of drugs to make me give more and more milk. I was hooked up to a machine which chafed and hurt and greedily took milk from my body.

Milk meant for my baby! My babies! I never got to nurse them. I never got to nuzzle them, to care for them, to give them a mother’s love. They were taken from me shortly after their birth so that I could keep producing milk for you to drink. And so it went, over and over again. Impregnation. Birthing. Milking. Until I was spent, my milk all used up, my body depleted. They had taken all that I could give and they had taken my babies. They killed me and ground up my body for hamburger. I was only five years old. I never knew what happened to my babies. 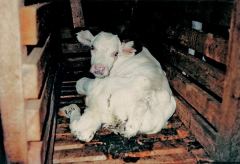 VEAL CALF. I was one of her babies. A few days after I was born, I was sold to a veal farmer.
Mother, they took me from you and chained me by the neck, alone, inside a wooden stall! It was so small I couldn’t even move around. And that’s where I spent the rest of my brief life. Day after lonely day. My muscles wasted away. I needed your milk, mother, but they fed me something else that made me so weak.

PIG. Veal calves are fed an iron-deficient milk substitute that makes their flesh desirably pale and also makes them anemic.

VEAL CALF. I was scared, Mother. Scared and lonely and sick. The stall was damp, the wooden slat flooring soaked with my urine. I had trouble breathing.

BEEF COW. So they pumped him full of antibiotics.

VEAL CALF. I wanted to be with you, Mother. Where were you when I needed you? I was all alone in that stall.

VEAL CALF. And finally, they killed me. I never felt grass beneath my feet.
And I never saw you again, Mother.

PIG. Oh, but wasn’t his flesh so tender, so succulent, so beautifully pale?
Wasn’t that veal a gourmet’s delight? Well worth all the suffering, wouldn’t you say?

If animals on factory farms could tell
In tongues made knowable to human ears,
Tales that could touch both heart and mind,
What sort of stories would you wish to hear?
Those terrors that were voiced are all too real
But must this be the way?
There’s hope for some – the rescued few:
A sanctuary brings them brighter days.
But most still languish in a living hell,
No moment of surcease, no touch of grace,
But we can make a difference in their lives.
We can give them love’s transformative embrace.

It’s in our hands.

They are in your hands,
These animals, these fellow beings,
In your human hands,
Hands that can describe
An arc of Freedom
Or delineate
A circle of Despair.
Hands with thumbs that make
It possible to grasp
A single thread,
Heft a club,
Or hold a fork and knife.
Hands that can bring forth
Or take a life.
These animals
Are in your hands.
Hands which may not hold
The blade that kills but
Pay the ones who spill
The blood that’s on your hands.
Hands that cover eyes.
You say you sympathize
But hope that blindness
Can comprise a world
Where the flesh that you
Consume is somehow
Joyfully given,
Rather than so cruelly riven.
These animals, their fate is in your hands.
And when you bring
That Leg,
That wing,
That thigh,
That chopped up muscle mass,
That piece of what
Was once a living
Being
That lived a short and
Oh so brutal life,
Up to your mouth
Remember this:
Those animals, they’re in your hands.